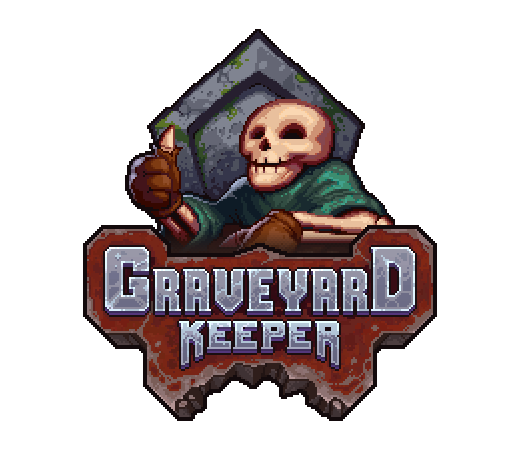 I absolutely loved this game, and I got sucked into it immediately as I sat down with it. I want to share some of it with you, hopefully without too much spoilers. The things I truly loved was the things I had no idea were in the game. That said, I didn’t know what I was to expect, as I hadn’t read much about the game, or seen much of it. I may have seen a few minutes of a stream here or there, but nothing extensive.

I sat down about a week ago, and got completely enveloped in the game for the whole week, until I finished it. There are obvious similarities to Stardew Valley, including it’s addictive “just one more day”-vibe, but Graveyard Keeper offered something different. I think the morbidity of being thrown back to something of a medieval time, to become a Graveyard Keeper (and not necessarily a good one) appealed to me. Combined this with the similarities to Stardew Valley you get a stark contrast. I soon noticed that a lot of the things I had wished for with Stardew Valley was actually in this game. Some automation, some neat ways of making deliveries, planting more than one square at the time, and not relying only on one way of completing quests.

The quests in this game offer different solutions, which was something I only discovered by accident. You could often complete it with money if that was your preferred mode of playing, and thus you can keep focus on building your kitchen garden along side your graveyard keeping, rather than going dungeoneering.

However, for adding somethings which made the game easier, they didn’t necessarily go all the way with it. Some of them were spotty, like crafting sometimes you can queue several things of the same, sometimes you can’t and when you can’t it wouldn’t remember the settings you last used when it came to the quality of the production. This would slow a lot of work down, while also forcing you to tediously click. For me this ended up being one reason I didn’t want to write books (yes you can write books!) until the very end.

One of the first characters we meet is the Donkey, who also happens to be one of my favorites, probably because he was a comrade. I had prepared a bundle of carrots for him and was very excited to give it to him, on that fateful day (you’ll understand when you play it). I wanted to share my crop with him, because he was helping me run my business. In regards to the other characters, I mostly disliked them all. And it’s possible that that’s the point, since this is such a different world from where we come from.

I have some minor gripes with the game, but I don’t know how much of it was about me rather than the game or if the game actually didn’t tell me properly. I ended up getting locked out of continuing one of the quest lines because I thought I was waiting for a different solution than I was. Without saying what I was struggling with I will say this: I had already triggered an event which apparently wouldn’t happen again, so I could continue, but I thought I needed to find it how to get through that same thing being triggered again. I was wrong. This did lead me to just very slowly play the game, and I probably didn’t progress the story further from this point until I had a good 40hrs in the game, and I was loving how “slow paced” it was.

I appreciated that the tech tree had hidden items which wouldn’t reveal until certain stages of the game, it makes more sense in a lot of ways, because you’re in a place and world you didn’t really know anything about.

My mind has a tendency to skip things, and which will result in me not reading properly during tutorials. I was burying corpses willy-nilly, and yes I saw red and white skulls, knowing one was minus (-) points. I just didn’t quite figure out how to make them better until I actually unlocked some late game technology. But when I did I ended up in a full new focus and zen-ly tended to my graveyard.

I ended up playing the game my way, which is tempting to call the wrong way, but I had a lot of fun. I hadn’t only screwed with one quest line, but I didn’t realize this until the very end.

Compared to Stardew Valley, I would like to say that I didn’t feel as stressed out by the week, and time moving the same way. As in Stardew your always thinking about the season, the crop, and such things. However, I was having some trouble realizing some stuff about the days and how that worked. Eventually I let go though, and just didn’t try to complete each thing every week, but let myself get lost in something I enjoyed doing. One week it may be fixing the graveyard, one week it may be fishing, and another I may just start selling stuff that needs to be sold. This is definitely how I’d recommend people play the game, don’t rush too much to do the story, but catch it when you can and prepare if you want to.

When I slowed down my pace, and just focused on what I wanted to do and complete for my own sake, the game became very enjoyable in a different way. I loved the play-through in it’s entirety, but I had one session where I started to hate the game, and that made me sad, but again that was a me thing, not a game thing. And I did get over it fairly soon.

If you’d like to pick up this game, and support me, you can do so through Humble Bundle via this link.

This site uses Akismet to reduce spam. Learn how your comment data is processed.